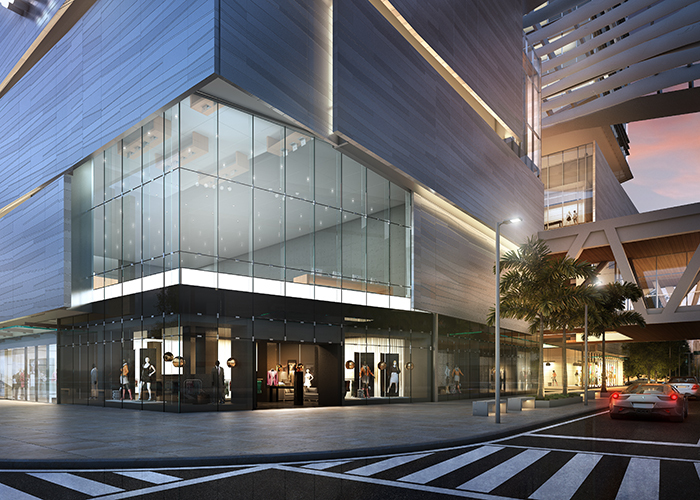 The stores will open in fall 2016 at Brickell City Centre’s 500,000 square-foot shopping center.

The five contemporary brands are the second wave in a series of upcoming retail announce-ments for the $1.05 billion mixed-use project. Next week Brickell City Centre will reveal a por-tion of its food and beverage tenants, with another mix of retailers to be unveiled in the fall.

Premium and contemporary retailers will be the emphasis on the second and third floors along with a mix of beauty, home decor, jewelry and apparel, among other stores. The food and bev-erage offerings, which are an integral piece of the entire Brickell City Centre retail concept, will offer a mix of fine dining, casual fare and new international brands opening flagships in the U.S.

“Announcing this next round of retailers demonstrates how great our reach is in meeting the needs of both our luxury-minded shoppers as well as our local shoppers who desire more con-temporary brands,” said Debora Overholt, senior retail director at Swire Properties. “We have a diverse mix of shoppers in Miami and feel our retail recipe will have something for everyone at Brickell City Centre.”

The diverse selection of retailers at Brickell City Centre represents Swire’s commitment to offer-ing an unprecedented mix of well-established luxury, premium and contemporary brands as well as emerging designers, many of which are unveiling their first outpost in the U.S. The curated mix will serve the international visitor, part-time resident, locals and professionals from the Brickell area.

“We have been working hand-in-hand with our partners to bring the perfect selection of some of American’s favorite brands and iconic international retailers to the Brickell area,” said Sharon Polonia, executive vice president of leasing at Simon. “This just further illustrates the transfor-mation of a once strictly financial district into a true urban destination.”

“These brands will find great success at Brickell City Centre and we welcome them to what will be the model for today’s modern-day retail centers in major urban areas. This is the future of the American shopping center,” said Courtney Lord, vice president of leasing for Whitman Fami-ly Development.

The condominium, office, and hotel component at Brickell City Centre are set to open beginning end of 2015.

Brickell City Centre is a landmark $1.05 billion, 5.4 million square feet, mixed&dash;use development in downtown Miami from Swire Properties Inc, one of South Florida’s leading international de-velopers of real estate known for its $1 billion master&dash;planned development of Brickell Key. The project’s first phase includes a luxury shopping center, two residential towers, a hotel with resi-dences, and two mid-rise office towers. The project is LEED®-registered for Neighborhood De-velopment – currently one of the largest in the U.S. Sustainability elements include the exclusive CLIMATE RIBBON™, an environmental art installation composed of steel, fabric and a continuous surface of glass that will connect all components of the development and create a comfortable microclimate for shoppers. As one of the largest private-sector project currently under construc-tion in Miami, Brickell City Centre began vertical construction in 2013 and the first phase of con-struction is scheduled for completion beginning third quarter of 2015. More information is available at www.brickellcitycentre.com.

Swire Properties Inc, headquartered in Miami since 1979, is one of South Florida’s leading inter-national developers of urban office, hotel and condominium properties. Known for its $1-billion, master&dash;planned development of the island of Brickell Key in downtown Miami, Swire continues to shape the Miami skyline with its latest project, Brickell City Centre, a $1.05-billion, mixed&dash;use complex comprising a gross floor area of 5.4-million gross square feet, including an underground carpark and 2.9-million square feet of office, residential, hotel, retail and entertainment space. The company is a wholly owned subsidiary of the publicly listed Swire Properties Limited based in Hong Kong. For more information, visit www.swireproperties.us.

Simon is a global leader in retail real estate ownership, management and development and a S&P100 company (Simon Property Group, NYSE:SPG). Our industry-leading retail properties and investments across North America, Europe and Asia provide shopping experiences for millions of consumers every day and generate billions in annual retail sales. For more information, visit www.simon.com.
About Whitman Family Development, LLC Whitman Family Development is a family-owned, diversified real estate development, manage-ment, and leasing company specializing in retail and headquartered in Miami Beach, Florida. Among other interests, Whitman Family Development is the developer, owner and operator of the acclaimed Bal Harbour Shops, ranked the world’s #1 shopping center by the International Council of Shopping Centers, and is the co-developer of the retail components of Miami’s Brick-ell City Centre.