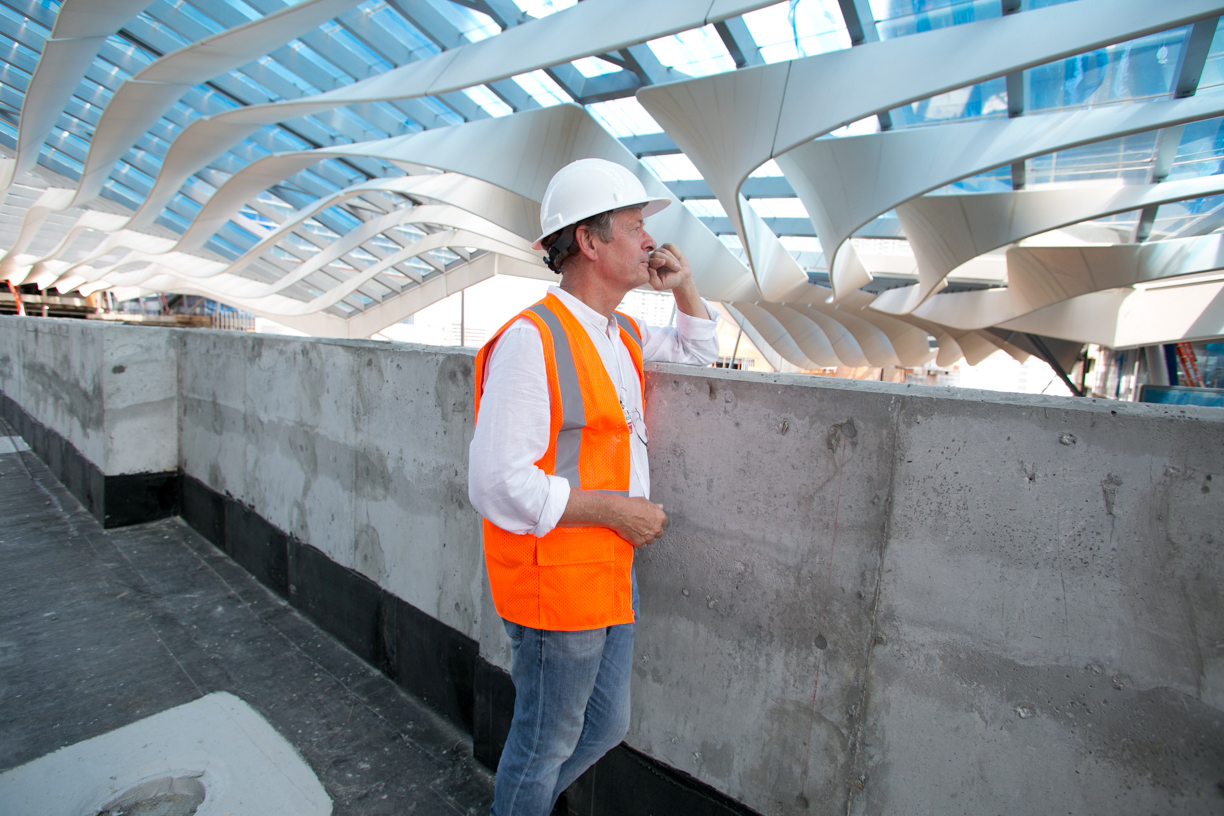 How Miami’s largest canopy harnesses the power of the elements.
To understand the Climate Ribbon, one must step into the complex mind of its designer, Hugh Dutton. A trained architect, he speaks the language of engineering fluently, but thinks of himself as an artist. “Mix the paint, stretch the canvas, and understand all the material givens to be able to do your art,” Dutton says. “That’s what is essential for me.” Dutton, a contemplative Parisian, expresses architecture in poetic terms. To create the new Climate Ribbon, a free-form, sculptural canopy now presiding over three city blocks at Swire Properties’s new $1.05 billion Brickell City Centre in downtown Miami, a vocabulary of images—fabric, sails, and wind—first danced in his mind. What he imagined ultimately took shape and became reality. But even he could not predict its full meaning. The Climate Ribbon isn’t just a canopy; it is an art form built to harness the power of the elements. Officially unveiled this fall, it is one of the largest permanent horizontal sculptures in the world.
THE ASSIGNMENT
In the spring of 2011, a group of architects hunched over a conference room table filled with 3D-printed models and technical sketches inside Miami firm Arquitectonica’s sleek, glassy headquarters in suburban Coconut Grove. They were brainstorming design concepts for Brickell City Centre, comprising a retail center, a business district, and a nightlife destination spanning more than nine acres. But that’s not what was concerning Bernardo Fort-Brescia, the Peruvian architect who co-founded the firm in 1977. On his watch, his team had earned a solid reputation for producing ecologically sensitive, sustainable projects. Brickell should be no exception. Its structures, he felt, must adapt to Miami’s subtropical climate. “We did not want another mall. We wanted a galleria—like Milano’s Galleria Vittorio Emanuel— that was open air but protected from rain and direct sun. Sort of the anti-mall,” says Bernardo Fort-Brescia, principal at Arquitectonica. He decided to remove the roof and replace it with the Climate Ribbon. To arrive at that decision, Fort-Brescia turned to his trusted partner, the artistic engineer Hugh Dutton. The pair had worked closely to bring geometry and light to TaiKoo Hui, a mixed-use retail complex in Guangzhou, China, also owned by Swire Properties. Opened in 2011, it is considered the precursor to Brickell City Centre.
By June of that same year, the two men met in Arquitectonica’s Paris office in the Ninth Arrondissement: one a broad-shouldered, macho Peruvian, the other a small-framed Frenchman in classic cashmere scarves. For Dutton, it was a dream opportunity. “I was so excited to meet that I lost my wallet on the way,” he says. “I left it on the bus, losing my passport and everything.” Fort-Brescia’s assignment presented an inherent challenge: to create an open canopy cutting across South Miami Avenue and connecting three high-rise towers. It needed to shelter the pedestrians below, allow for natural light, provide shade from direct sun, and reduce Miami’s high temperatures and subtropical humidity—all without the use of air conditioning. “We wanted to tie the development together visually— hence the ribbon concept,” Dutton says. An understanding was reached: It would be not only functional, but symbolic—an homage to the forces of nature. Still, practical questions remained: “How can we make it work as a tangible piece of architecture? What can we do to make it ecological?” It took $30 million and four years of diligent collaboration between Arquitectonica and Hugh Dutton Associés (HDA) to produce the final answers. Today, the result is an elegant reflection of human ingenuity. A sinuous canopy of steel and glass, its form is a balletic sculpture that undulates across 100,000 square feet, harnessing the power of the elements. By design, it mutes the sun, collects rainwater, channels the wind, and is anchored to the earth.
FUNCTION & FORM
The shape of the canopy was mainly determined by the architectural surfaces it links together, and its core purpose: to cool, shelter, and shade the shopping center. To do this, Dutton’s team had to know how the wind, sun, and rain behave at the Brickell site: Would the breezes off Biscayne bay flow down the middle of the shopping center? Is it realistic to think wind would provide enough coolant? The designers at HDA didn’t have to guess about weather patterns on the other side of the Atlantic Ocean. They conducted digital simulations to reenact the natural forces of Miami’s climate, enacted upon a 3-D model of the development’s buildings.
Deconstructing the Climate Ribbon
Under Construction
The architectural fabric of the Climate Ribbon is made of fiberglass blades that are mesh coated with Teflon, chosen in part for its translucency. The shape of these blades is scientifically designed to deflect the sun’s rays in the heat of the summer months and in the hottest hours of the day. 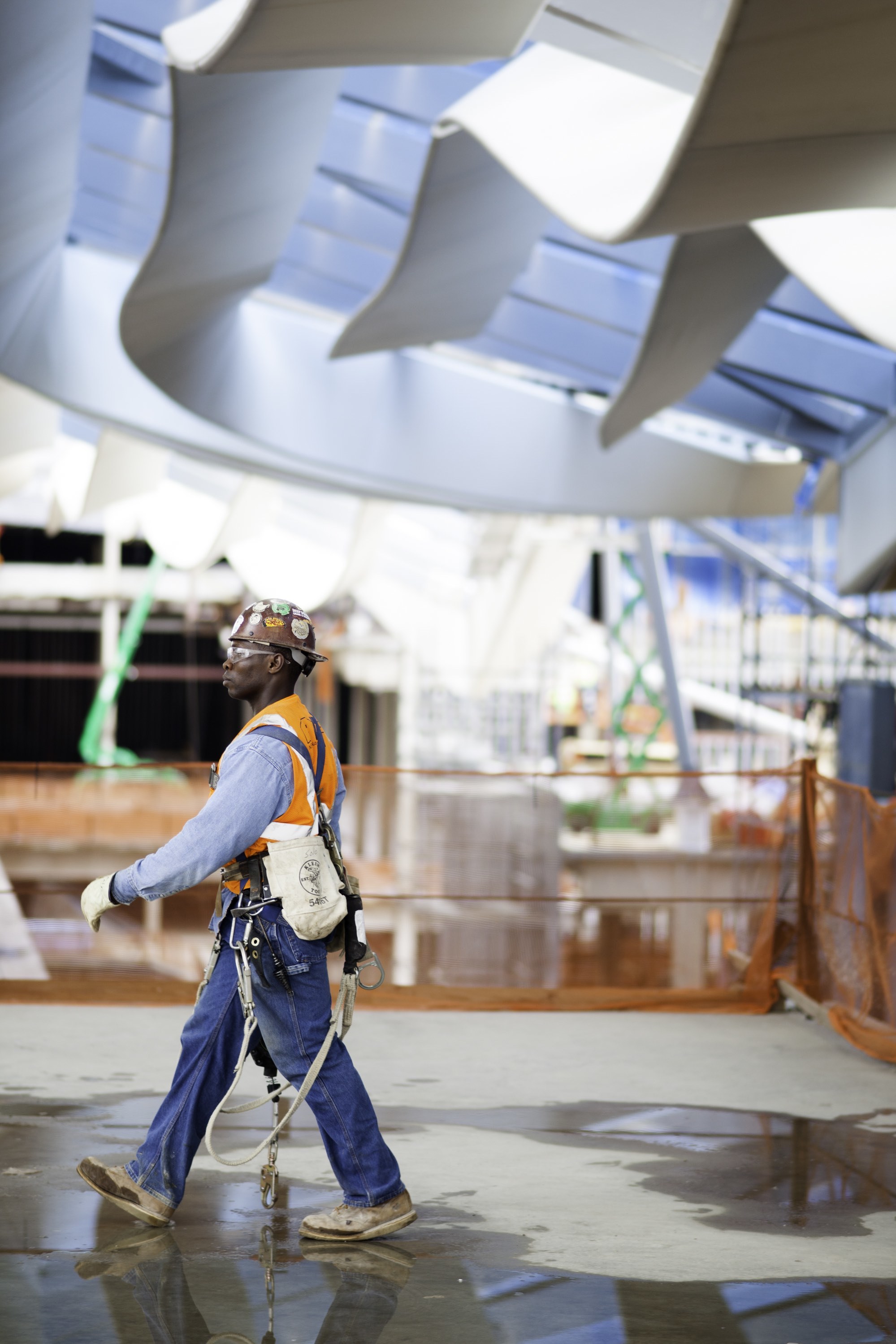 The Canopy
The Climate Ribbon is composed of 1,000 tons of steel, two and a half acres of glass, and three and a half acres of PTFE (polymer resin) fabric that canvases the louver blades. Despite this weight, it appears to be a light, translucent sculpture expressing movement and flexibility.

Material Matters
Steel is the primary structural material of the Climate Ribbon. Fabricated in a Czech Republic factory by Signum Group manufacturers, the steel was rust-protected and finished with a light gray paint to diminish its visual impact against the transparent glass canopy, before being shipped back to Miami. 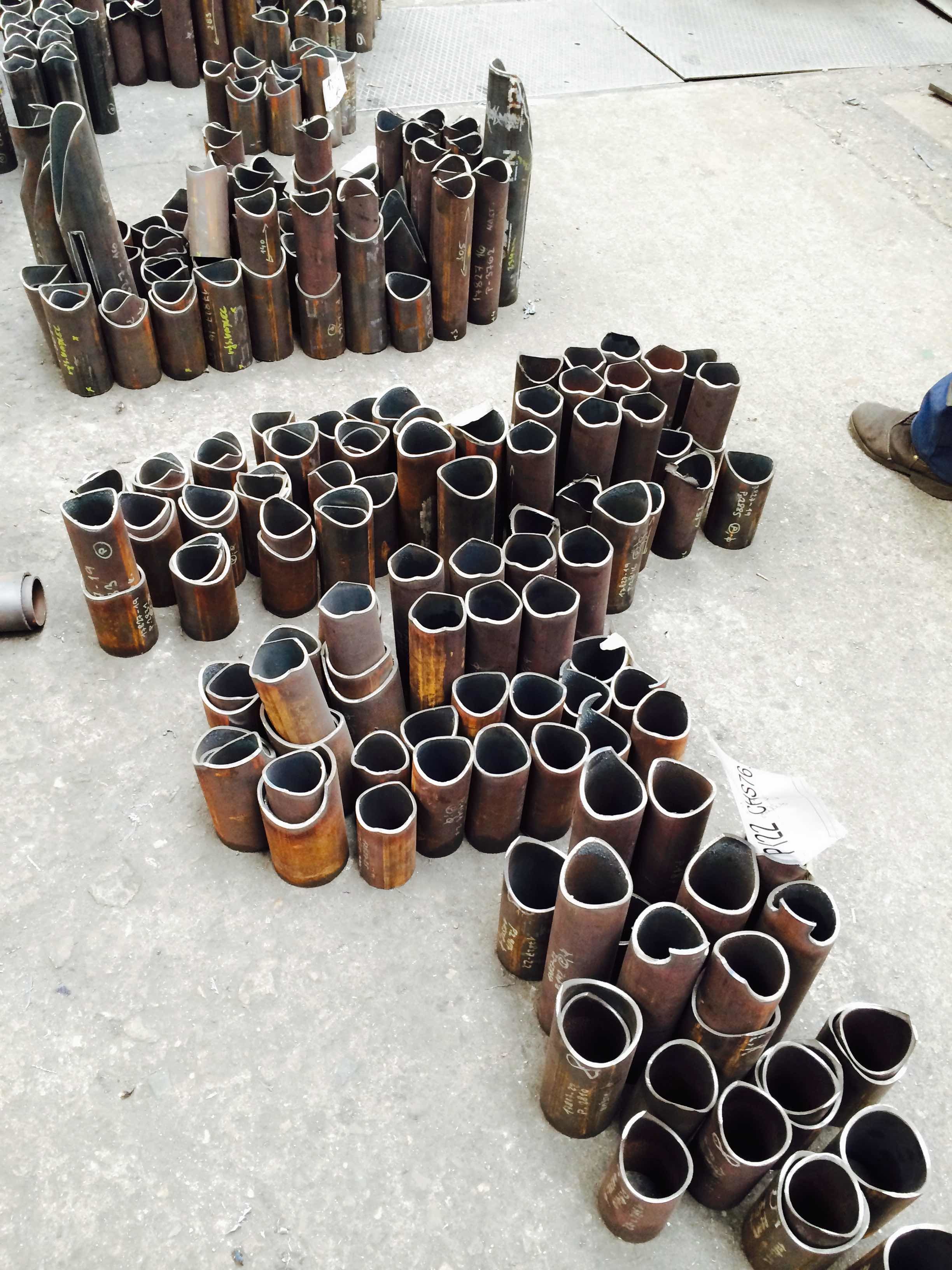 Designer Hugh Dutton
“Sketching is so important, particularly now, when computers are doing everything. In this enormous world of 3-D complexity, sketching keeps you connected with the project,” says Dutton (pictured here at his offices in Paris in 2013). Photo credit: Houda Kabbaj 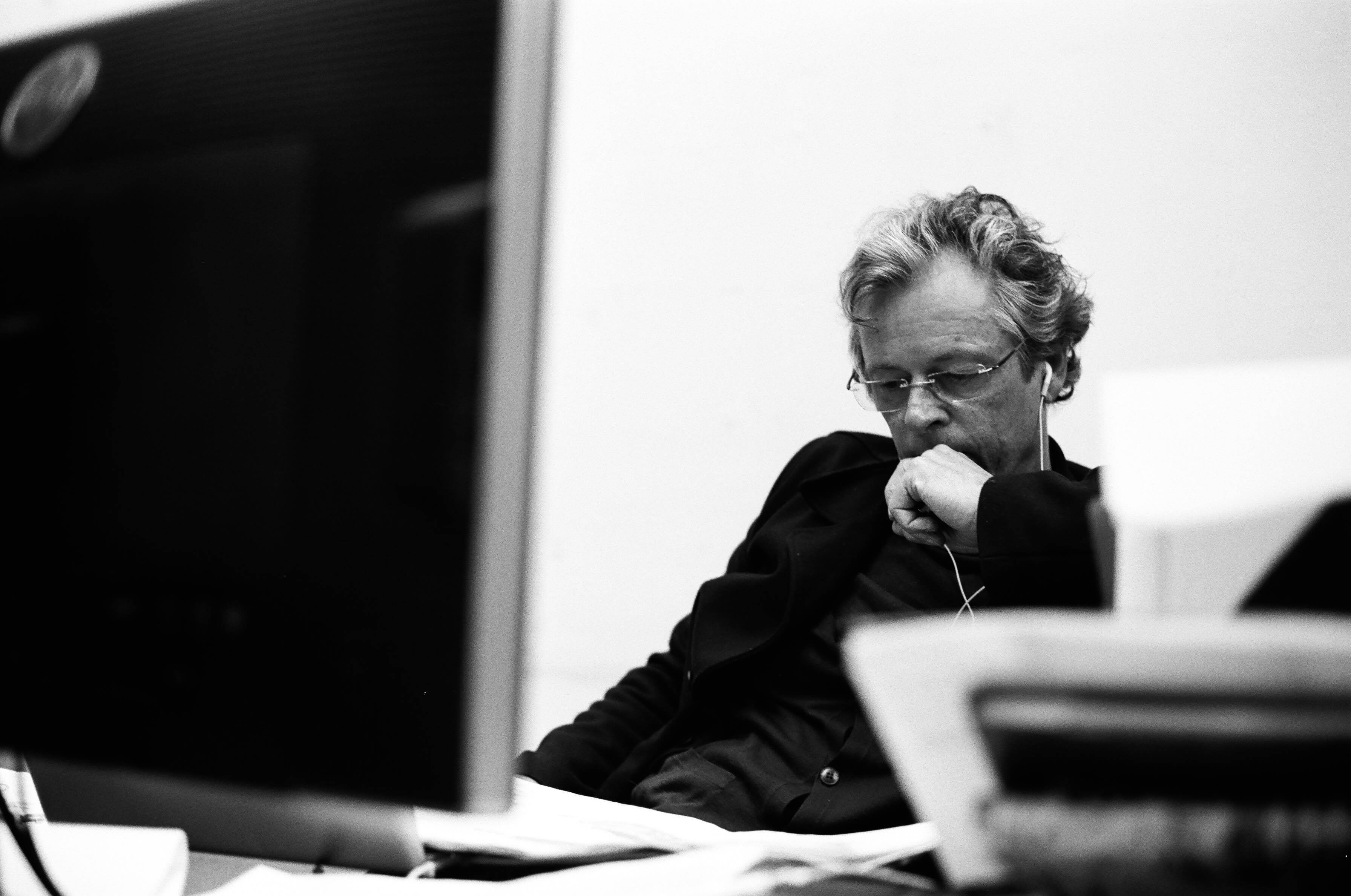 Early Sketch
An original sketch by designer Hugh Dutton depicts the canopy’s dominant concepts, which channel the energies of the sun and wind. By capturing the predictable airflow of Southeastern trade winds, Dutton here envisions the entire development as a self-cooling wind corridor. 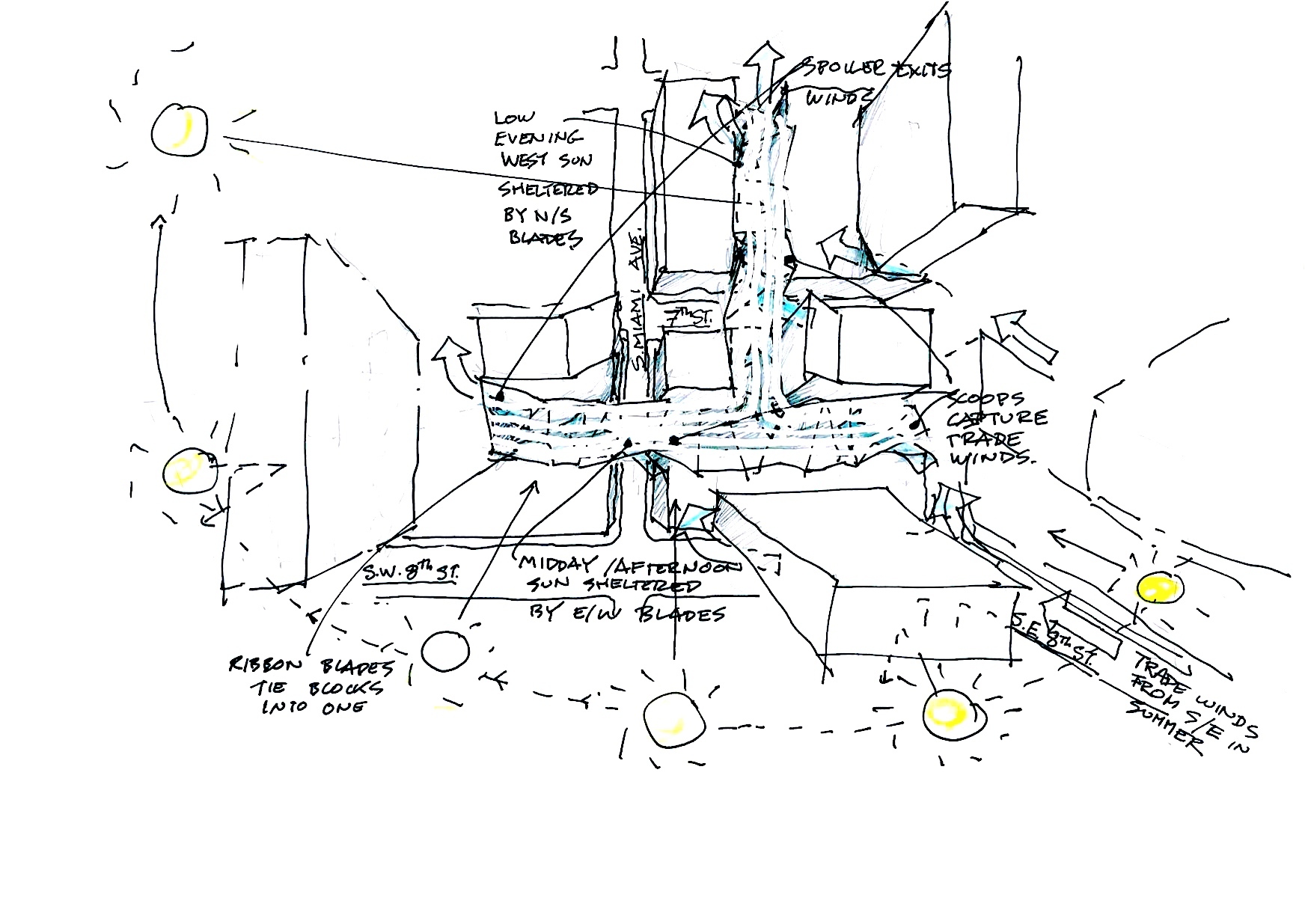 The Inner Machinations of Design
Virtual simulations of seasonal airflow, solar patterns, and rainfall were carried out. In industry parlance, this is called the “parametric design process” in which nature provides quantitative data used to shape design. Using modeling software called Rhino, in which users can “plug in” different sets of technical data, the team simulated solar activity, enabling them to not only gauge the intensity of the sun on the proposed glass and steel canopy, but to begin predicting the patterns of the wind around it. “The capacity of the computer to simulate and propose geometries is moving fast,” says Dutton, who welcomes increased use of computing power in the design practice. “Parametric design helps us to keep the message clear.” According to Dutton, data and design are inseparable. Technical know-how is talent. In the hot-headed world of deep-pocket development, the ability to scientifically support your own design choices is a powerful weapon. Armed with this, Dutton boldly moved forward with his design thesis: The structure of the Climate Ribbon must capture the trade winds. “I grew up in Jamaica,” he says. “My father was a planter and our home was a rambling house on a hill, surrounded by verandas with jalousie [slatted] windows. In the summer months, trade winds sent cool breezes through the house. I envisioned our canopy this way—as a corridor for the wind.” The trade winds affecting Miami are, in fact, predictable. They consistently blow in from the east, inland. Having studied these patterns, Dutton realized his advantage: Southeast 8th Street provides an optimal wind corridor for the summertime trade winds directly from the sea toward the Brickell City Centre development. The question was how to capture and steer them.
DIRECTING THE WIND
At first, HDA played with the idea of using solar panels on top of the canopy, but scratched it because it would have been too dark for their open-air sculpture. “People put solar panels on buildings, just so they can say ‘we’re green buildings.’ But there’s another, far more expressive approach to sustainable design,”Dutton says. His complex solution to energy-efficient cooling is a flexible modular system involving an intricate interaction between the wind, fiberglass blade scoops, and spoiler exits, all working to channel air in a specific direction. But at this point, it was all still a prediction. HDA needed empirical proof. Having convinced Arquitectonica of this absolute necessity, Dutton traveled to the Canadian town of Guelph, Ontario, in September 2011, to meet with top wind specialists at RWDI, an environmental engineering consulting firm there. A 24-foot wind tunnel equipped with acceleration channels, speed sensors, and pressure gauges provided Dutton with the perfect experimental laboratory to test his theories. First, RWDI used 3-D printing technology to build a model of Brickell City Centre and the Climate Ribbon. It was made out of plastic. Using this wind tunnel, dynamic simulations were made to measure airspeed, temperature, and comfort conditions upon the structure. At one point during this process, engineers added smoke to the wind tunnel so they could clearly see exactly where the wind wanted to go. After multiple days and simulations, HDA knew exactly how to position the canopy for the optimal capture of southeastern trade winds.
TECTONIC TYPOGRAPHY
After the first wind test in Canada, designers shifted focus to structural safety. Supporting the Climate Ribbon’s full weight of approximately 1,000 tons demanded their full attention. Three separate layers were created to support this structure, including steel framing, a glass covering, and a series of strong blades made of “architectural fabric” (a.k.a. PTFE synthetic resin) suspended beneath. Raising the stakes, the Climate Ribbon also had to jump between three different buildings on three distinct city blocks. To safely achieve this degree of independence, HDA’s composition of triangular glass modules is laid out on a steel grid shell, like a series of tectonic plates that shift imperceptibly. “Geometry is fundamental in all our work,” Dutton says. “It’s all about understanding geometry in three dimensions, and putting that to work for you.” Underneath this transparent surface, curved fiberglass louvers act as powerful reinforcements. Separated by negative space, these allow the entire structure to breathe and dance. The resulting design is a luminous, wavy canopy that blocks the sun’s direct heat and provides shelter from the rain—bending and stretching, like a living plant seeking sunlight. From one perspective, the Climate Ribbon can be seen as a technical exercise, the beneficiary of advanced computational design. From another, it is a work of art, intended to make a statement about nature, wind, and sunlight. For Dutton, the message is clear: “We have an obligation to mankind and the environment to make our designs beautiful and in harmony with nature. To do this, we must understand her forces.”